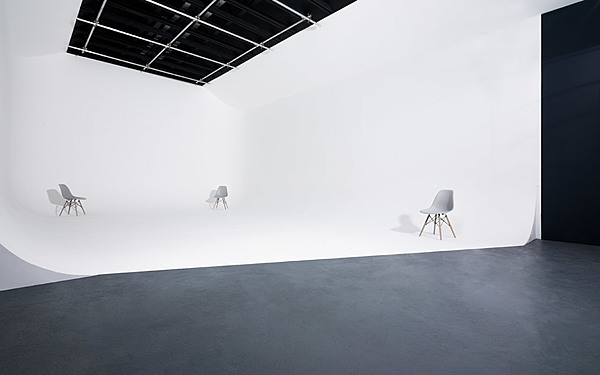 Limited car parking available. Parking area for larger shoots can be arranged for £100 a day for up to six vehicles.

Furnishings: Studio Two comes with a mid century kitchen table and chairs, a brown leather sofa downstairs and a black leather sofa in the make-up area along with three grey leather make-up stools.

(1) The Producer:
(2) The Principal : Film & Photographic Ltd
(3) In this agreement the following expressions shall have the following meanings:

1. The Producer must provide evidence of public liability insurance with an indemnity limit of at least £2,000,000 which is valid for the duration of the hire period. The policy must be in the name of The Producer.
2. The permissions granted in this agreement in respect of the Site are granted by the Principal who is free and exclusively entitled to enter into this agreement and is able to grant the permissions set out in this agreement.
3. The Producer shall pay invoices as stated on the booking confirmation form.
4. Cancellation of a booking once confirmed cannot be refunded and must be paid in full.
5. The Producer should have the right to:
(a) Enter the Site and make use of it as may be required during the dates of the shoot including in particular the right to rehearse and film scenes of the principal photography of the production and to take stills and photographs for use either in publicity, book publishing or merchandising thereof.
(b) To represent the Site as being another real place or fictional place according to the requirements of the story of the production.
6. In the event of unforeseen and wholly exceptional circumstances (including fire, flooding or matters of force majeure) which are wholly beyond the control of the Principal and which would prevent the use of the Site for the Shoot the Principal shall be entitled to cancel this agreement by notice in writing and in such an event the Principle shall not be liable for any loss or damage suffered by the Producer however the Producer shall be entitled to a refund of any fees paid in advance.

7. The Producer undertakes and agrees as follows:
(a) No stiletto heels to be worn at the Site unless agreed to beforehand with the Principal. If agreed and damage does occur, the Producer must pay for the repair to the cove.
(b) Care must be taken to protect the cove from equipment (tripod legs, light stands, flight cases etc.) the full cost of any repairs or replacement required to be undertaken to the floors shall be met by the Producer.
(c) All arrangements in respect of smoking, drinking and eating must be agreed in advance by the producer with the Principal.
(d) No use will be made of any telephone line on the Site without prior and express consent of the Principal.
(e) No property belonging to the Principal can be used for set dressing without the express consent of the Principal.
(f) The Producer agrees to pay the Principal for electrical power required for the duration of the hire period. The Producer agrees to pay for the use of power at the rate of £.50/kwatt/hour. A reading will be supplied from before and after the shoot in the form of a digital photograph of the meter.
(g) If the Site is left unattended for any period then the Producer shall ensure that the Site is left secured i.e. all doors and windows properly shut/locked.
(h) No floors, walls or ceilings at the Site shall be marked in any way (i.e. painting, wall hangings, hanging of pictures/props) without the prior consent of the Principal.
(i) The Site must be left clean and tidy and in good order and restored to its original state prior to the Shoot in default of which the Producer agrees to reimburse the Principal for any costs thereby occasioned to include the cost of professional cleaning.
(j) The Producer shall not be deemed to have vacated the Site until the Site is fully cleared of all equipment and personnel to the reasonable satisfaction of the Principal. If any property is left on the Site then the Principal shall be entitled to make a charge until such property has been removed (as it may prevent other users from making use of the Site). Such property includes any rubbish that is not contained in bins provided. Rubbish removal will incur a fee.

9. Prior to the commencement of the Shoot both the Principal and the Producer shall thoroughly inspect the Site together as the Producer shall be deemed to have taken notice of the actual state and condition of the Site and shall take all reasonable precautions necessary to prevent accidents or injuries to any person or persons using the Site during the dates of the Shoot.

10. The Producer shall indemnify and keep indemnified the Principal against all actions, proceeding and costs, claims and demands which may be incurred by any person using the Site during the Shoot or any damage to the Site or any property belonging to the Producer on the Site arising directly or indirectly out of the Shoot.

11. The Producer will pay all fees and charges due to any authority to enable the Producer to use the Site for the Shoot provided always that the Principal has notified the Producer of the requirement for any such consents and charges prior to the signing of this agreement.

12. The Producer shall not allow on Site any persons who are not directly employed by him or her without the written consent of the Principal.

13. The Producer shall not make any structural or decorative alterations to the Site without the written prior consent of the Principal and shall use the Site only for the purpose of the Shoot as set out in this agreement.

14. The Producer shall remove, properly store and return after the shoot any furniture which is required to be removed from the Site for the purposes of the Shoot and shall make good any damage caused to any such furniture during such removal, storage and return.

16. In the event that the Producer is unable to commence or complete the Shoot on or within the Dates of the Shoot due to inclement weather conditions (or otherwise) the Producer may request either an extension or a rescheduling of the Dates of the Shoot in order to complete the necessary filming/ photography. Such and extension shall be by mutual consent of the parties and at a level of Total Fees no less favorable to the Principal than the Total Fees previously agreed.

17. The Producer shall undertake all reasonable measures required in order to protect the intellectual property rights retained by artists and/or designers of items accommodated on Site. Such items may be a painting or an item of furniture where the designer and/or artist still retains copyright. In the event of the Producer wishing to remove any such item from Site this shall only be done under the direction of the Principal.

18. The Principal retains the right to regain full access to the property if any of the above conditions are breached by the Producer, at which point the Producer must leave the premises with any property that belongs to them.

19. The Principal will not be held responsible for any outside sound or noise that may impair the quality of audio recording that is beyond their control.

20. Unless otherwise agreed with the Principal animals shall not be permitted on the Site.

21. When child models are involved in a Shoot only one supervising adult shall be permitted per child.

22. This agreement shall be subject to and its construction validity and performance shall be governed in all respects of English Law.

I confirm I have read and agree with all the above terms and conditions.

Name in print: Matthew Peberdy
Signed for and on behalf of the Producer:

Parking is on a first come first come first serve basis at the Tram Depot. If available we can reserve six guaranteed third party spaces for £100 per day on Casimir Road, directly behind the studios. The fee goes to a charitable trust. On site, off road load and unload directly into the studio is always available. Hackney Studios at the Tram Depot are a very short walking distance of Clapton Overground, which is three stops from Liverpool Street Railway Station.

EACH STUDIO COMES WITH:

We advise you try and bring the amount of hangers and robes you need as availability may be limited.

You are free to bring your own catering and PAT tested EQ. We can also arrange catering and EQ hire if required. Drop off and pick up of EQ and art department/props should try to be arranged on the same day of the shoot. In some circumstances we may be able to store props or have EQ picked up and delivered prior and post shoot. Please call to discuss. If you are having any deliveries sent to the studios, please make sure you have the correct studio number along with the contact details of the person who arranged the booking with the studio. Please make sure to arrange disposal of excess rubbish such as packaging as per terms of contract.

If you can’t find what you're after, try refining your search or get in touch and we’ll see if we can help find the perfect studio